It's damn near Easter and this is my first post and first painting of the new year. It's so cliche to start the new year in January anyway....yeah right. I've just been extremely busy in my mom-verse working on my other master piece, that it's taken a while to get these balls in the air. But I tell you no matter how long it's been painting and posting are still my loves. 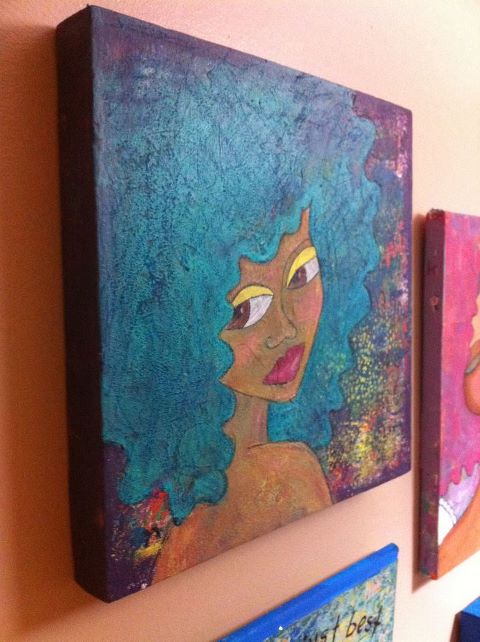 So is this new painting. She kinda reminds me of me. And I rarely say that. She's a lil sexy with out trying and definately has some things on her mind....like yours truly. A great way to kick off the creative year..

Most of you know one of my bigger than big dreams is to have a line of greeting cards and stationary...to go along with my line of home goods. and since shakin things up with the move i've been feeling a lil frisky so i'm puttin it into my work.

Here's an initial attempt. I'd love to here what ya think...i think.

i been wanting to put some of my old writings up for a while now. and i just finished putting together a website for M2BM. and since there's been so much shakin' and moving around here i figured this was as good a time as any. enjoy.

they say i won't make it past tomorrow.
cuz when they look at me all they see
is the pain, the grief and the misery.
but i know that inside of me a seed it grows
and all it needs is a ray of hope
and the brights sunshine of possibility.
it takes me to fly so high above the trees.
it takes me to fulfill my destiny.

i know its been forever and a day...or at least it seems that way. and so much has happened and is happening since my last post...and i could spend all day aplogizing but...i would put off writing another day. which would turn into another month and next thing you know it'd be snowing outside. you get it? so let's just get on with the get on.
i've benn in Atlanta for almost a month now. i know my plans were to move to Charlotte and i said id never, ever move back to the A...ever again. well i was wrong. and boy am i glad. this has been one of the most exciting, expanding, inspiring months i've had in i don't know how long. and ive been loving every minute of it.
i have been enjoying old friends and making new ones. over a year ago i set out the intention to meet more like minded people. people like me. and for a girl who thought she was so alone on this planet and would never see an accurate reflection of who she really was....i have been happily proven wrong once again!
im so full of ideas and creativity. coming up to the time i decided to move back to atlanta, i realized the things i missed most and wanted back in my life were DISCOVERY, ADVENTURE & EXPLORATION. and i realized i could do that and still be responsible and still be a good mom. so one opportunity presented itself and i lept. then another and i lept again. and then another...well you get it.
im so happy to be feeling more secure and confident in my personal guidance system. it feels good to start to trust myself again. it feels so good to get back to living again. and the world has been so welcoming and im welcoming it again. so you understand why i've been a little mia...but i'll try my best to keep this thing we've got going...because i like it. and i like you too.

well i thought i'd update y'all on the ever closer move to Charlotte. it is still full speed ahead and i have a couple of interviews coming up this week (x ur fingers). you know it has been a real emotional and mental tug of war this thing. i have had to really release the notion that i should stay put just because i have a job and family here. its like cutting a zillion threads to what "they" say and following my own guidance system. and i tell you that sometimes it's been tuff for me to believe in the unseen.

before i had V i would jump up an go where ever, when ever. the running joke in our house is..."if it doesn't fit in the car...leave it!" i traveled very light and many times my life was like the sand on the beach, easily built and easily washed away. But now and i know i've talked about it before...the responsibility of being a single parent has made me much more cautious. and in many ways it has been good. but i do feel like i have to come to a middle ground and trust myself enough to know that i would never do anything to endanger my son's welfare.

with that being said i feel i need to tap into some more of that impulsive girl i once was. just because i became a mom doesn't mean the things i want have changed....i actually want more now. the anty has definitely been upped! And it's been a real test for me to add in the parts of the old me with the newer mommy me.

i realize i have to have more self-trust and stop looking at my life as a series of mistakes. it is instead has been a series of building blocks and lessons that have brought me to this point. i admit i was awful at paying bills, coming to work on time, knowing when to keep my trap shut, picking men..what ever it was, you name it i fucked it up.

so now here i am trying to make a 180 with out losing myself. and it ain't easy...not one bit.especially when you literally have another life depending on you. and i accept i will neva, eva, eva be a conventional, traditional chick. i was not made that way. but i still want to have success and happiness. so i'm left having to figure it out as i go while facing my own fears of not believing i can take care of us on my own.

that's the real deal of the whole thing right there in a nut shell. pow! at times, i am terrified that i can't do it but at the same time know i have no fucking choice but to make it happen. and sometimes i spend way to much time trying to figure out the HOWS instead of trusting in you know WHO.

i know somewhere along the way i chose this path. i know the Godverse has some super spectacular and sparkly things for me and mine. and this is just a test. a test to see if i will trust, if i will turn my eyes and ears from the world and turn them inward and listen to the message and see the vision that has been placed on my heart. and as long as i do that, when i do that...the fear subsides and things seem to fall into place perfectly. when i don't...well you don't wanna know what.

so here's to less nail biting and more trusting.

you know what i hate? edges. i hate painting edges. i see other people's art...im always peekin' and snoopin' around other artist's work...anyway i see these beautiful edges that just seem to extend off the page of the canvas. me. i dont even like to paint my edges. im not good with details. they overwhelm me. of course i like what "they" are doing more than what moi is up to. and i need to just do me damn it. 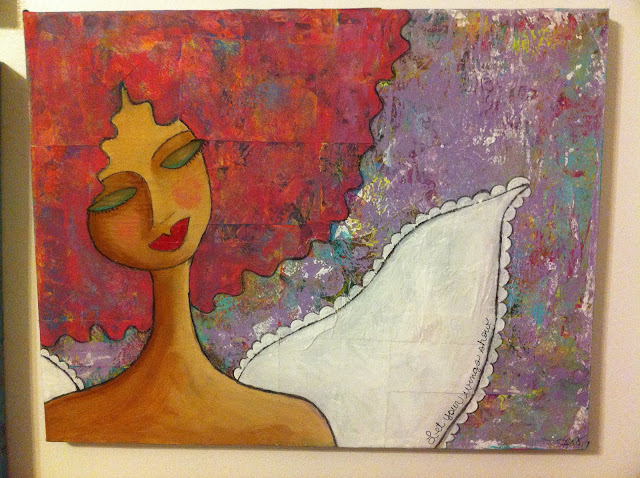 painting forces me push through my fears of rejection and notions of not being good enough. and sometimes i dont push though. i just sit there and stare at the canvas and decide...not tonight...not this week. 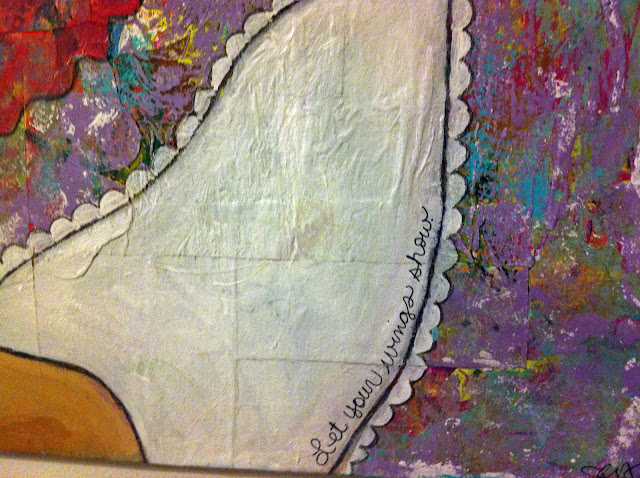 I'm the Fly Girl of the Week!!

Just poppin in to let you all know that this week i'm featured in on of the flyest ((hint, hing)) blogs in the blogosphere!! I have been following Andrea's Fly Girl blog for some years and am still hooked. She has always been and still is ahead of the game when exposing talented, stylish, ambishous and uber creative women of color.

she generously spotlights a Fly Girl of the Week, every week and this week IT'S ME!!!! you know we have not because we ask not. and sometimes when we ask we still think....nawwww, they ain't gonna pick me, little ol' me. but holla atcha girl!!!! she picked me for this week and im so over the moon.

so stop by and check me and Andrea out.

Promote Your Page Too